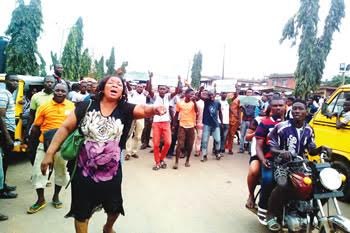 Police officers attached to the Isheri Osun Police Division in Lagos state have been accused of shooting at a tricycle driver Godwin Ekpo and his family, killing his breastfeeding wife Idongesit. This incident allegedly happened as the family was returning from a church programme on Wednesday night.

According to Punch, Godwin who is currently in a critical condition at the Lagos State University Teaching Hospital, Ikeja, was on his way home from church when he met a team of police officers allegedly extorting tricycle riders who passed through Obalagbe bus stop.

In a bid to avoid them, Godwin attempted to speed past them. This got the police officers angry and one of them, a police corporal identified as Aremu Musesiu, opened fire at his tricycle with the bullet shattering his car, killing his wife who was breastfeeding their 3 month old baby at the time of the incident. The bullet also pierced through Godwin's neck as he turned to look at his wife and his child.

Seeing that they have caused a problem, the police officers fled the scene of the incident.

Narrating what happened, a tricycle driver, Henry Chibuzor, said “I was going home around 10pm when I saw the eight-man team asking me to stop at a checkpoint. I was there with four other tricycle drivers. The man was coming from church with his family. As he got to the junction, he swerved and his tricycle mistakenly brushed their patrol van. A policeman hit the tricycle’s windscreen with a baton and damaged it. The second policeman fired a bullet which hit the woman in the neck, came out from the other side, and hit her husband too.”

He said the policemen collected N5,000 from him and also extorted money from other tricycle drivers. Another witness, Kabiru Olaoye, while narrating what happened, said the residents quickly formed a crowd at the scene and prevented the policemen from leaving. He added that the cops called for reinforcement, adding that officers of the Special Anti-Robbery Squad and policemen from surrounding divisions arrived at the scene and rescued the killer-cops.

Tricycle drivers in the community yesterday staged a protest over the attack on the couple. The protesters held placards, some of which read, ‘Isheri Police, your generation will suffer,’ ‘Stop killing us,’ among others. The protest train went to the Isheri Osun Police Station, where they met a team of armed policemen in more than six vans. An Armoured Personnel Carrier was also mounted on the road to the station. The Financial Secretary of the Committee for the Defence of Human Rights, Lagos State branch, Chinanzor Ifechiga, who led the protest, was brutalised and her telephone seized by the Divisional Police Officer as she was accused of filming the protest and taking pictures. She was manhandled by eight policemen, who struggled to take the phone from her on the order of the DPO.

"The DPO said I was one of them (the police) and I should not join the protesters. Because I refused, he said I should release my phone to him. He said he would disgrace me before everybody. He pointed a gun at me and the crowd dared him to shoot. He then ordered eight policemen to beat me up because I refused to give him my phone. He humiliated me before the protesters. But I am determined to get justice for the couple; and I want my phone back.”she said

Commenting on the incident, the Lagos state Commissioner of Police, Fatai Owoseni, said the police officer who fired the shot that killed Mrs Ekpo have been arrested while the DPO of Isheri Osun had also been issued a query for disobeying the Inspector General of Police’s instruction.

Meanwhile the corpse of Mrs Ekpo has been deposited at a mortuary while the children of the couple are with the police where they being catered for.